Ever wondered what is Hacker News' favorite xkcd comic? Wonder no more! Here is how I answered this important question.

This dataset contains all stories and comments from Hacker News from its launch in 2006 to present. Each story contains a story ID, the author that made the post, when it was written, and the number of points the story received.

This public dataset is hosted in Google BigQuery and is included in BigQuery's 1TB/mo of free tier processing.[...]

Great, so we can grab the comments table and run some queries. Let's download all the comments which contains the string "xkcd" and process the data locally with ruby. The post-processing will probably be easier to implement in ruby than SQL, at least for me. We'll have to parse the free form text and extract comic IDs to find out which comic is the most cited — and hence most beloved by proxy. 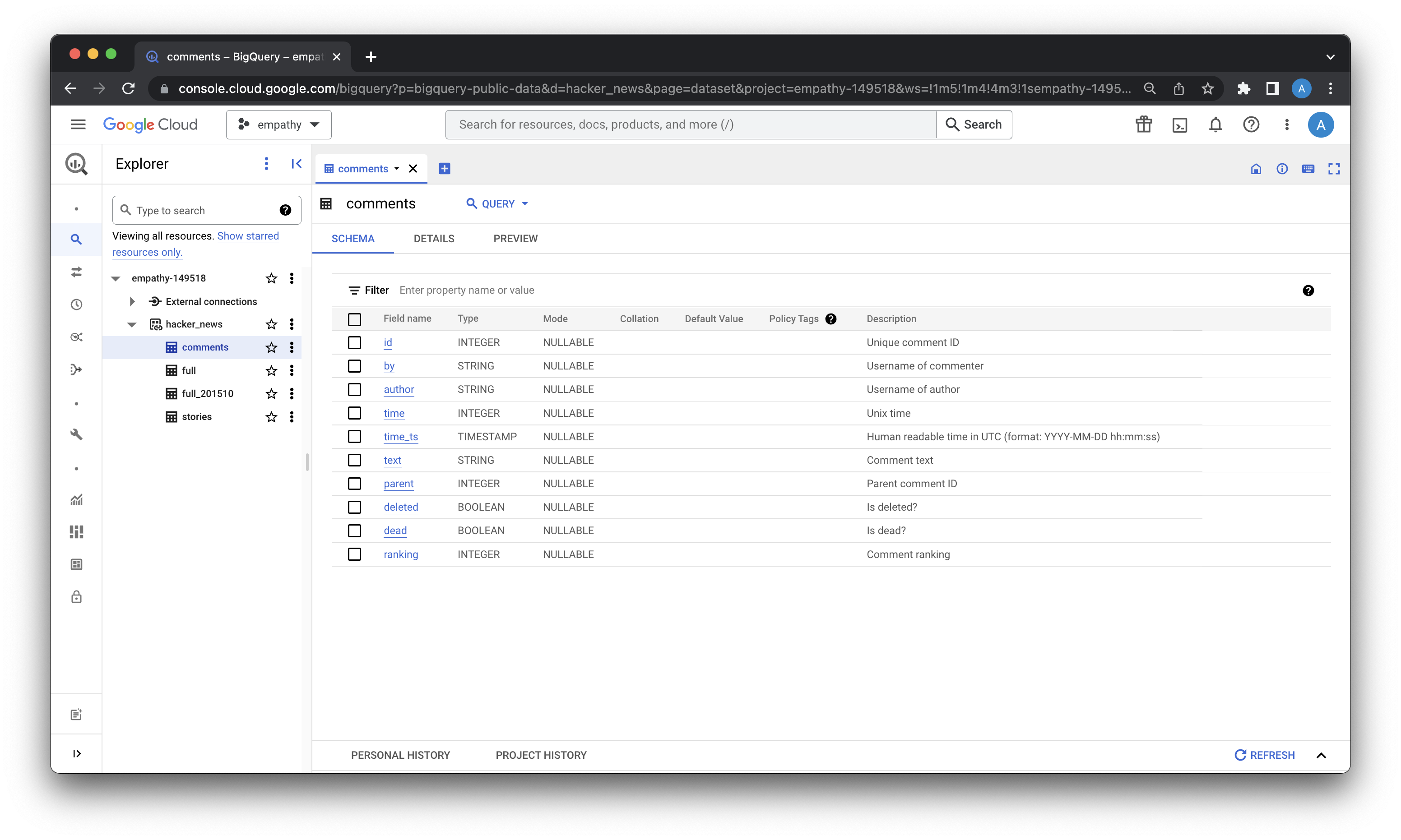 So I ran the following query:

Since we are dealing with arbitrary text, it's better to download the result as JSONL vs CSV. I also rename the file to .jsonl, since the file isn't json and that's how my brain works.

(yes I know, I'm doing cat pipe – For me, it's the right way to roll when quickling hacking on the command line. See also this comment).

I go back and check the details of the table I queried: it's stale. Womp womp.

Take two: use BigQuery with the correct table

The full table is what I want. It has all the posts and comments and is updated regularly. 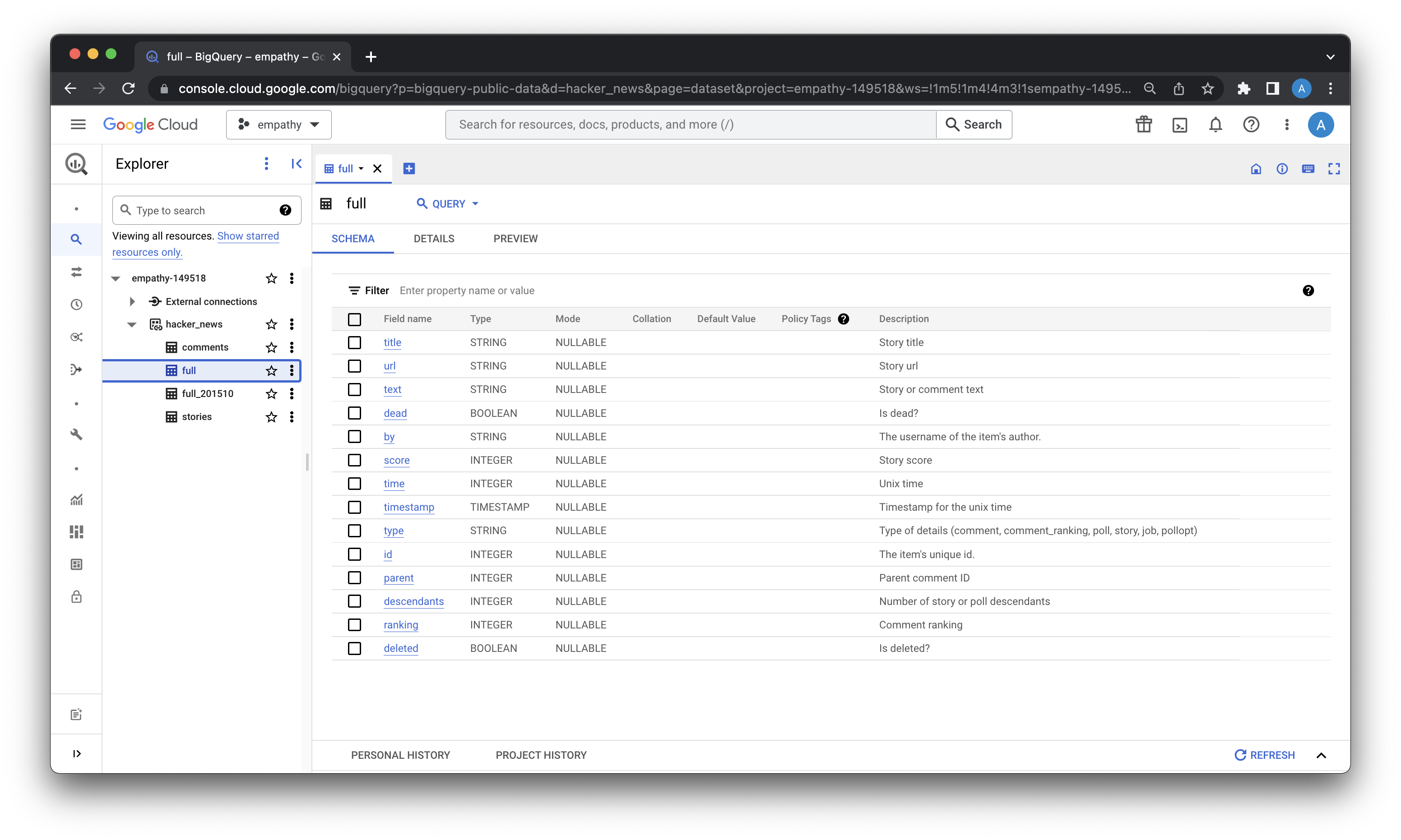 I craft a similar SQL query and 13 seconds later, I have what looks like the full dataset I need:

$ cat raw.jsonl | jq -r '.id' | wc -l returns 18411. Compared with hn.algolia.com's 19,524 results, we are roughly correct – unsure where the missing 1000 results or so come from. Maybe algolia is fuzzy matching with some other string? Maybe our dataset isn't complete?

Cleaning up the data

So I write a short ruby program to ingest the JSONL, unescape the html and save the result back as JSONL. I wish I could do this directly with jq, but I didn't find a way to do it.

I now need to deduplicate data. E.g. https://m.xkcd.com/2116/ is the same as http://www.xkcd.com/2116 and as http://xkcd.com/2116/. I also need to map imgs.xkcd.com links (e.g. https://imgs.xkcd.com/comics/python_environment.png) back to the comic IDs. In order to build the mapping of image files to IDs, I could crawl xkcd.com, use some kind of search API, manually map the files, etc. I opted for the xkcd's JSON endpoint:

Now I can write a ruby program (the last one?) which will extract comic IDs from the comments. I'll take m.xkcd.com into account but ignore other subdomains, such as blog.xkcd.com, what-if.xkcd.com, forums.xkcd.com (RIP), uni.xkcd.com, 3d.xkcd.com, etc. 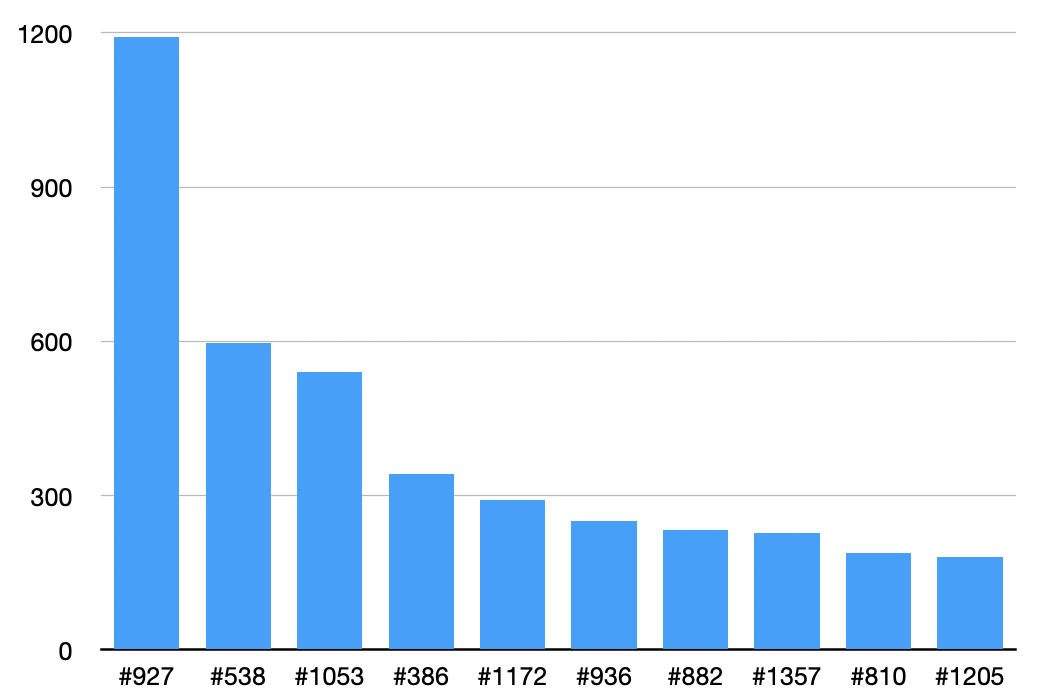 What happens if we look at the comic cited by the most number of different people? Pretty much the same result – top 7 are unchanged. 9th place gets replaced with Exploits of a Mom and the 8-10th places get switched around.

Some images didn't get mapped back to their comic id. E.g. https://imgs.xkcd.com/comics/python_environment_2x.png which is a larger version of https://imgs.xkcd.com/comics/python_environment.png. Some comics, such as Time and Now have many images. I could manually map these but we are dealing with only a handful of entries. Ignoring these is fine.

In order to parse comments such as "xkcd 538 ($5 wrench) is also up there", I wrote some ugly regular expression. I'm probably failing to parse some IDs and also grabbing IDs incorrectly. That's inevitable when dealing with freeform text. The effect of parsing (or misparsing) on the top 10 is likely negligible: I tested by writing different regular expressions and the top 10 remained the same.

Let's see how the top 10 compares with my personal favorites:

I share a few common ones with the top 10. The main difference probably comes from me either liking less popular comics or some comics being easier to cite than others.

You can access the raw jsonp files and my scrappy ruby code: https://github.com/alokmenghrajani/hackernews_xkcd_citations